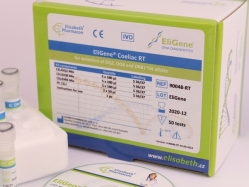 Celiac disease, also called celiac sprue is one of the most common enteropathogenic disorders and is characterized by a lifelong hypersensitivity to gluten proteins found in wheat, rye, oat and barley. Celiac disease does not belong to allergic disease but it is characterized by intolerance to gliadin forming parts of gluten. In early childhood the immunological intolerance to gliadin, leads to a chronic inflammatory response in the small-intestinal mucosa and subsequent malabsorption characterized by chronic diarrhea, steatorrhea and failure to thrive. Many adult patients can also show other atypical signs such as, abdominal distention, weight loss, fatigue, skin- and joint problems or migraine-like headache. Indeed, others may remain largely asymptomatic. Non-treated celiac disease increases the risk of NHL (non-Hodgkin's lymphoma) and probably small-intestinal cancer.

Until recently, celiac disease was considered relatively uncommon with an estimated prevalence rate ranging from 1 in 1000 to 1:4000. However, the availability of new serologic tests have led to the observation that celiac disease is much more common, affecting about 1 of 100-400 persons in Europe, the majority of patients showing little clinical symptoms. Considerable evidence now indicates that celiac disease has a strong genetic component.

Celiac disease is a multifactorial disorder associated with HLA-DQ2.5 (DQA1*05/DQB1*02) or DQ8 (DQA1*0301/DQB1*03:02) that is associated in haplotype with HLA-DR4 allele. HLA DQ2.5 is expressed in the majority (> 90 %) of those with celiac disease and DQ8 in about 8%. The expression of these HLA-DQ2 or DQ8 molecules is necessary but not sufficient to develop celiac disease and accounts for only about 50% of the genetic component of the disease. Studies in sibling (sib recurrence risk for celiac disease of 10%) and of identical twins (concordance of 70%) suggest that the contribution of HLA genes in celiac disease is less than 50%. About 95% of all celiac patients possess this particular genotype compared to approximately 20% of the normal population. Of the few celiac patients who are negative for HLA-DQ2.5 and HLA-DQ8, a great majority are HLA-DQ2.2 (DQA1*02/DQB1*02) positive. From this point of view absence of these alleles is useful in excluding celiac disease. However, at least one other non-HLA gene and some environmental factors are also likely to be involved in the disease.