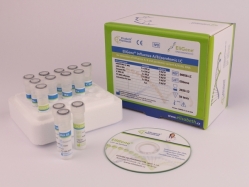 EliGene® Influenza A/B/Pandemic LC kit is intended for the detection of Influenza A and B RNA together with Pandemic variant A/H1N1.

Principle of the method

Influenza is an infectious disease of birds and mammals caused by RNA viruses of the family Orthomyxoviridae, the influenza viruses. The most common symptoms are chills, fever, runny nose, sore throat, muscle pains, headache, coughing, weakness and general discomfort. Approximately 33% of people with influenza are asymptomatic. Flu can occasionally lead to pneumonia, either direct viral pneumonia or secondary bacterial pneumonia, even for persons who are usually very healthy. Typically, influenza is transmitted through the air by coughs or sneezes, creating aerosols containing the virus. Influenza can also be transmitted by direct contact with bird droppings or nasal secretions, or through contact with contaminated surfaces. Influenza viruses can be inactivated by sunlight, disinfectants and detergents. Often, new influenza strains appear when an existing flu virus spreads to humans from another animal species, or when an existing human strain picks up new genes from a virus that usually infects birds or pigs. An avian strain named H5N1 raised the concern of a new Pandemic influenza after it emerged in Asia in the 1990s, but it has not evolved to a form that spreads easily between people. In April 2009 a novel flu strain evolved that combined genes from human, pig, and bird flu. Initially dubbed "swine flu" is also known as influenza A/H1N1. Influenza B almost exclusively infects humans and is less common than influenza A. This type of influenza mutates at a rate 2–3 times slower than type A.

EliGene® COVID19 UKV RT Kit (REF: 90082-RT) is intended for qualitative RNA detection of SARS-CoV-2 virus, in parallel with the genotyping of the of the mutations N501Y and P681H present in spike protein characteristic for the variant B.1.1.7 (20I/501Y.V1) also called UK variant.

More information can be found here